So there was going to come a time where for ‘Anime Rewind’ I would take a look at a dub. Firstly, I just want to say I love dubs, they are great. Of course naturally they aren’t everyones cup of tea and way to watch an anime, but for myself personally I like being able to completely engage myself in a show without having the need to read subtitles. Now the common argument is that ‘There aren’t any good dubs!’ or ‘Dub voice actors just don’t get the characters at all’ and while I can see that point of view it would be completely wrong if I didn’t recognise some extremely well produced/written dubs. For me there is one dub that will always remain in my top ten dub list forever, that show being ‘Toradora!’.

Produced by J.C Staff, who are responsible for producing anime titles such as ‘Prison School’, ‘Food Wars’, ‘Golden Time’ and the ridiculous ‘Shimoneta’ came ‘Toradora!’ a 25 episode production adapted from the light novel by the same name. Under the direction of Tatsuyuki Nagai (Mobile Suit Gundam IBO) and the legendary screenwriter Mari Okada (Black Butler) this show ran on Tv Tokyo in the years of 2008/2009. As an anime fan who absolutely adores a majority of J.C Staff works I knew that this show was special before I was going to watch it. The animation and general direction of the anime is the underlying story teller, managing to connect the audience to lots of significant scenes and moments throughout the series.

The general plot itself is what you would expect from a ‘Slice of Life/Romantic drama’ anime. We follow the life of Ryuji Takasu, a high school boy who lives with his not-so-with it single mother that results in poor Ryuji acting as the ‘man of the household’. Things for Ryuji get complicated when his neighbour, the fiery Taiga Aisaka becomes a pain in his side, but also a friend that he can rely on. As luck would have it Ryuji has a crush on Taiga’s best friend Minori Kushieda, and alternatively Taiga has feelings for Ryuji’s best friend Yusaku Kitamura. Ryuji and Taiga work together to help each other out in order to fulfil their romantic desires. However, as all good anime would have it introduces the not-so-nice girl Ami Kawashima, a childhood friend of Yasaku who has been a model but now has returned to school, who has slowly shown interest in Ryuji. As time progresses Ryuji and Taiga develop feelings for each other and life situations and complications enter making it impossible.

What makes this particular show stand out from the rest is the depth of the plot. It manages to make you relate to characters and connect yourself to them and the situation that they might be facing. The anime tackles lots of real life complicated issues that teenagers would have definitely dealt with when they were growing up. The pacing of the show makes it very easy to watch, even if it is 25 episodes. As I am reviewing the dub version the voice actors that are the main characters (Erik Scott Kimerer, Cassandra Lee Morris, Christine Marie Cabanos, Johnny Yong Bosch and Erika Harlacher) managed to capture each characters personality and portray them in the way that they are meant to be portrayed. Not wanting to take away the talent from the Japanese V.As, however the Dub V.As just seem to get it in regards to the emotions and general vibe of each character.

This show is special. There is something so light hearted and warm about it that it is one of those series that I just have to watch every year without fail. The characters are beyond gorgeous and the story is captivating. It has the right amount of comedy to make you laugh out loud, but also enough drama to make you cry and let your emotions run wild. The ending just makes you scream for more, even after watching 25 episodes. I personally don’t give out lots of full marks for my reviews, however for this show it is impossible not to.

I rate this show 5/5. It is anime perfection.

Dub or Sub, you cannot go wrong with ‘Toradora!’

You can currently stream the series right now on Netflix Australia here or purchase it on dvd from Hanabee website. It is also available in JB Hi Fi and all good anime dvd distributors. 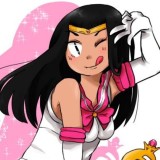 Farrah wasted her time on twitter talking about anime non stop till one day a website known as Japandaman decided to give her an official role as Anime Writer and Social Commentator. She is now the Senior Editor and Anime Editor of Japandaman.com

When she's not doing her day job it is more than likely she would be catching up on the latest and greatest anime and giving her two cents. She also loves to be in the know on all things anime!

Make sure you haven’t missed anything!

That time @princesslaucha2002 and I went to check

@teamlab_borderless will have you doubting your ve

All you need is... #japan #tokyo #odaiba #rainbowb

Marketplace for the Snow Festival in Sapporo, Hokk

Who’s been down these iconic escalators before i

That time I was packing for Japan and the Yoshi Tr