Great update from Capcom today with the release of the first full trailer for Resident Evil Revelations 2. This game had scares a plenty on the 3DS and then the Wii U and was also a gorgeous looking game. Want to know if the sequel continues that high standard? Watch the trailer below and then tell us what you think!

The game will be launching in Japan sometime early 2015. It’ll be showing up on PS4, Xbox One, PC, Xbox 360 and PS3. No mention of a Nintendo console which is a shame.

Looking to add some new apparel to your Resident Evil stash and love to stock up on anything Resident Evil related? You can now nab some unique collectibles in Japan for your smartphone, tablet and more

First up we have a ring made by manufacturer, Garni. The ring carries an engraving of the steering from the ship seen in Resident Evil Revelations. You can pick it up for ¥42,000 as well as a pendant with a similar design for ¥28,350 (images can be seen below).

Catch all this merchandise plus more at Capcom’s online store.

Capcom have unveiled a new trailer for the Wii U version of the ex-3DS exclusive title, Resident Evil: Revelations. The trailer was put together to show off the Wii U specific functions of the game prior to its release.

One of the cooler features is that the Wii Gamepad will support off-TV play freeing up the television for the non fan, as well as incorporating Miiverse support. Watch out for the game when it releases across North America on May 21st and Europe on May 24th for PC, Xbox 360, PlayStation 3 and Wii U.

Resident Evil: Revelations was without doubt one of the finest and engrossing games for the Nintendo 3DS. Recently Capcom announced that they were relinquishing the handheld’s exclusivity for this title and bringing it to home consoles as well.

Leave it to the Japan release of the game to make it that bit more sweeter and leave us envious of our Japanese gaming Otakus. It’s been revealed that when Biohazard: Revelations Unveiled Edition drops down in Japan, the Premium Edition will also ship with a few exclusive bonuses. One of the items will be a replica of the wrist watch worn by Jill Valentine in the game, the BSAA watch is made by the US agency. The watch will feature numbers that glow in the dark as well as a swanky case to store it in.

The Unveiled Edition will also be shipping with a CD soundtrack to the game also a BSAA card case will be shipping to round off the gorgeous set. There will be a few different versions of the packaged deal from a version that come with the watch and a copy of the game for ¥39,900. You’ll also be able to buy a set which will come bundled with everything excluding the watch for ¥7,490. Or alternately, you can pick up just the game for ¥4,990.

So how much for the set that comes with absolutely everything, you might ask? Only a cool ¥42,000. Stings a bit, doesn’t it?

Only the other day I was at EB in the city asking about a release date for Resident Evil Mercenaries to which the sales guy shrugged his shoulders. I was browsing the EB site, checking the 3DS section when I came across this tidbit of information…Mercenaries has a release date of 7th of July!!! This is awesome, the stream of AAA titles for the 3DS will hopefully continue with this one and see us through until Mario Kart, the new Mario game, Resident Evil Revelations and Snake Eater 3D are released! 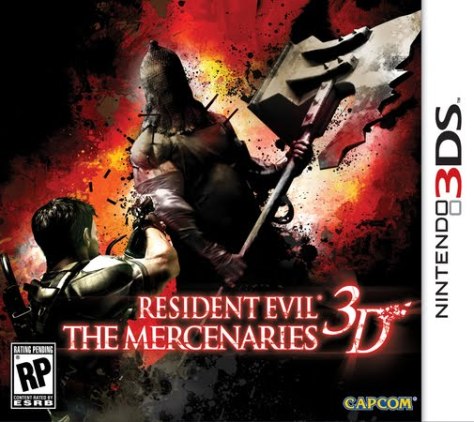 First the awesome news of Dream Trigger coming to the 3DS now more better news in the form of Resident Evil Mercenaries. A new character has just been added but more importantly, it now has a release date, granted it’s a US date but the PAL regions won’t be far off 🙂 So first things first, the new character is Rebecca Chambers, who is a member of the STARS Bravo team. Rebecca first appeared in the original Resident Evil and along the way has played a cameo in some of the other titles.

Rebecca also made a welcome appearance in Resident Evil 5’s Mercenaries Gold Edition so it’s fitting that she’s managed to fit into the handheld version.

And a pretty cool trailer complete with gameplay, overacting and a bit of gore…why not?

And to round off this update, the release date that the lucky US gets it on is…June 28! And just when it couldn’t get any better, Mercenaries will be shipping with a demo for Resident Evil Revelations just to up the high expectancy metre through the roof!!

Capcom Captivate has just wrapped up and amongst the many announcements one of the more exciting ones would definitely have to be the new trailer for Resident Evil: The Mercenaries with great new footage including the confirmation that a playable demo of Resident Evil Revelations will be bundled with Mercenaries…can’t wait for this as Mercenaries isn’t due until 2012!! 🙁 The demo will definitely tide me over until the full release.

For those in the dark about Capcom Captivate, this is a media only event where new games and business announcements are revealed. It used to be called Gamers Day. Anyways, new trailer below 🙂

Get Your Otaku On!